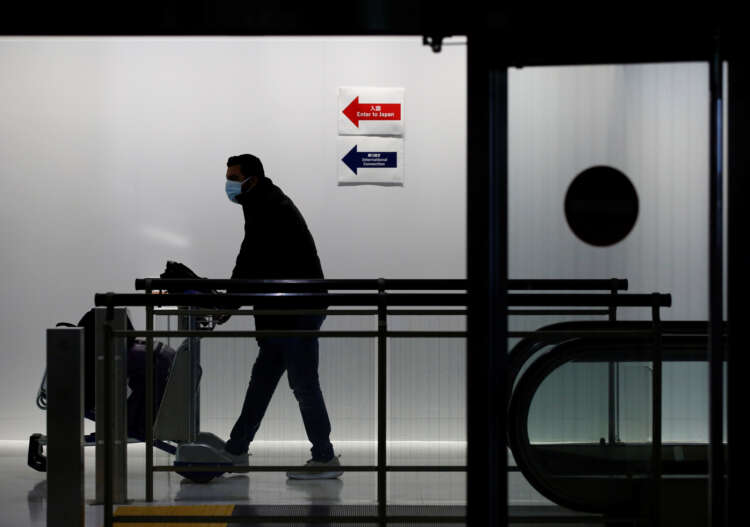 By Rocky Swift and Elaine Lies

Japan has some of the strictest pandemic border measures among major economies, requiring travellers to present a negative coronavirus test taken within 72 hours of departure.

The government may soon waive tests for vaccinated passengers, with the change taking effect in a few weeks, Nikkei reported late Monday. A daily cap of inbound travellers may be raised from 20,000 to 50,000 as early as next month, Fuji News Network said on Tuesday.

Chief Cabinet Secretary Hirokazu Matsuno declined to comment on the timing of any border easing, saying it would depend on COVID conditions in Japan and overseas.

“Along with taking every measure to prevent contagion, we’ll also promote economic activity – and with border control measures, we’ll relax them in stages while keeping these two things in balance,” Matsuno told reporters.

Japan’s foreign ministry said it is aware of the media reports, but deferred comment to the health ministry, which has jurisdiction over border infection controls. The health ministry did not immediately respond to a request for comment.

Prime Minister Fumio Kishida, who is recuperating from COVID at his home after testing positive on Sunday, said in May that he wanted to bring Japan’s border measures more in line with those of other Group of Seven nations.

Japan in June opened up to tourists for the first time in two years, though visitors must get visas and stick to guided, package tours.

Domestic and foreign business groups have urged a greater relaxation of Japan’s border controls, saying the measures risk causing the nation to fall behind economically.

“We would like to reiterate that the need for business people to have a visa before departing for Japan is still an obstacle,” European Business Council president Michael Mroczek said. “This in particular for businesses that have no presence in Japan.”

Om Prakash, president of the American Chamber of Commerce in Japan, encouraged the government to align its border travel polices with other G7 countries “to restore Japan’s reputation as a welcoming and open place.”

(Reporting by Rocky Swift and Elaine Lies in Tokyo. Editing by Gerry Doyle)