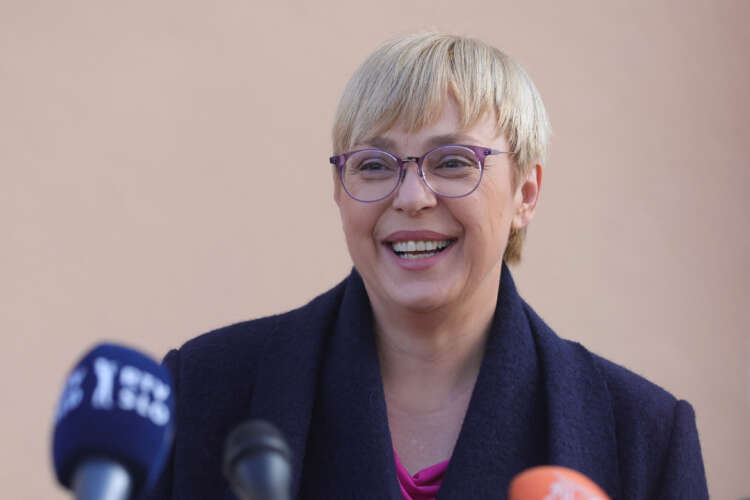 LJUBLJANA (Reuters) -Natasa Pirc Musar, a lawyer, won the second round of Slovenia’s presidential election on Sunday and will become its first female head of state, preliminary results showed.

Pirc Musar, 54, won 53.86 percent of votes in the runoff, while her rival, right-wing politician and former foreign minister Andze Logar, won 46.14 percent, according to election commission data based on 99 percent of the votes counted.

“I will do my best to be a true president for all, to work for fundamental and constitutional human and democratic rights and democracy,”” Pirc Musar told reporters after claiming victory.

Although the role is mostly ceremonial, the president is commander in chief of the armed forces and also nominates several top officials, including the central bank governor. Most of the nominations have to be confirmed by parliament.

The new president of Slovenia, an EU and NATO member state, will replace Borut Pahor who has been active in politics for 30 years. A former fashion model who served two five-year terms, Pahor is often referred to in public as the Instagram president for his frequent use of the social network.

“I expect the next president to care about us, the citizens, to represent Slovenia in a good manner,” Uros Pinter said after casting his ballot in Ljubljana. “I think it is time for a female president.”

Pirc Musar, a former TV presenter who became an influential lawyer, campaigned on human rights, the rule of law and social welfare issues.

Her rival Logar, 46, is a member of the right-wing Slovenian Democratic Party (SDS) of former prime minister Janez Jansa, who lost April’s parliamentary election to the environmentalist Freedom Movement of Robert Golub.

Commenting on the outcome of Sunday’s presidential election, Golub told reporters: “I am confident that we will work well together to address the common challenges of the future.”

Germany warns its delegation of Egyptian spies at COP27