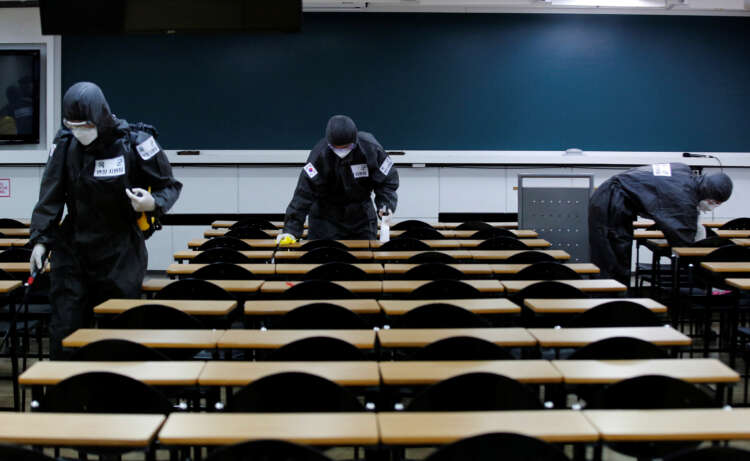 SEOUL (Reuters) – The South Korean government said on Wednesday it will appeal against a court order to exclude private education facilities from a COVID-19 vaccine pass mandate, the first major legal tussle over vaccinations that have been widely accepted.

A Seoul administrative court ruled on Tuesday that private education facilities such as cram schools, reading rooms and study cafes should be temporarily exempted from the mandate, granting an injunction requested by coalitions of private education providers and parents’ groups.

“We think it is necessary to expand the vaccine mandate to stabilise the current situation and expedite the recovery of our normal daily lives,” health ministry spokesman Son Young-rae told a briefing.

“We will carry out the suit as rapidly and diligently as possible, and immediately appeal against the injunction.”

South Korea has largely been one of Asia’s coronavirus mitigation success stories even though it has suffered regular flare-ups in infections.

More than 90% of South Koreans aged 12 and older were fully vaccinated as of Tuesday.

The vaccine mandate, one of the most stringent in the region, requires proof of vaccination and a booster to gain access to most public facilities, including restaurants, bars, gyms, department stores and large supermarkets, as well as privately run educational centres.

It does not apply to public schools.

But it has triggered an uproar among some parents who refuse to vaccinate their children mainly due to concern about possible side effects. They have called the mandate “vaccine dictatorship.”

The policy took effect on Monday for people aged 18 and older and will begin for teenagers in March, after a delay following the backlash.

Infections have been surging among teenagers since distancing curbs were eased in November, under a plan to “live with COVID-19”, including the resumption of full-time in-person classes in schools.

The government reinstated the curbs after just six weeks as record-breaking daily tallies and serious cases put ever greater strains on the medical system.