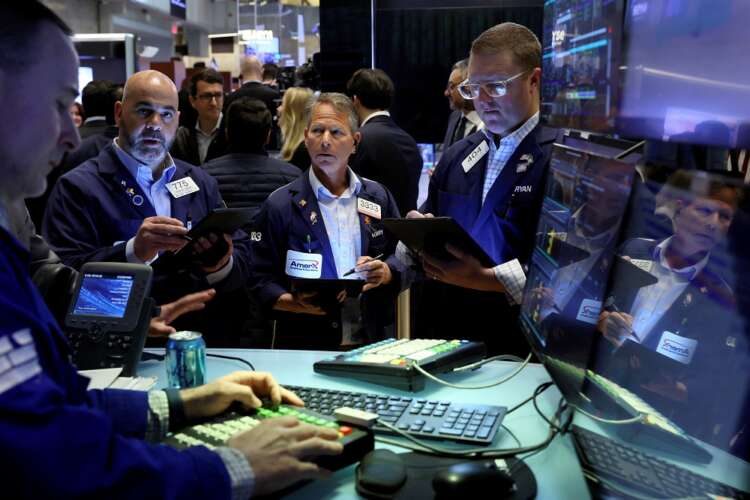 By Herbert Lash and Danilo Masoni

NEW YORK/MILAN (Reuters) -A gauge of global equity markets edged higher on Tuesday while 10-year U.S. Treasury yields slid from the 3% level as investors remained cautious, expecting the Federal Reserve to hike rates by the most in a single day since 2000 to curb inflation.

Investors expect the Fed to hike rates by half a percentage point on Wednesday, and to detail plans to reduce its $8.9 trillion balance sheet. The U.S. central bank raised its policy interest rate by 25 basis points in March.

Major stock indices in Europe rose, but Wall Street eked out smaller gains as traders braced for a potentially more aggressive decision by policymakers on Wednesday.

“The Fed’s not going to be worried if eventually these next few rate hikes start to hurt growth and lead to some job losses, because right now the economy is on solid footing,” said Ed Moya, senior market analyst at OANDA.

MSCI’s all-country world index rose 0.39% and the pan-European STOXX 600 index gained 0.53% the day after a “flash crash” in Nordic markets caused by a trade involving a single Citigroup sell order.

“We could get a dead-cat bounce after the Fed meeting if it’s not more hawkish than what the market has been fearing,” said Jimmy Chang, chief investment officer at the Rockefeller Global Family Office, “but I do think the broader trend is still very cautious on the equity side.”

Overnight in Asia, Australia’s central bank raised its key rate by a bigger-than-expected 25 basis points, lifting the Aussie dollar as much as 1.3% and hitting local shares.

The Bank of England is expected to raise rates on Thursday for the fourth time in a row.

Asian equities on Tuesday were mostly steady in holiday-thinned trade, with both Chinese and Japanese markets shut. But in Hong Kong, Alibaba shares fell as much as 9% on worries over the status of its billionaire founder Jack Ma.

A state media report that Chinese authorities took action against a person surnamed Ma hit the stock hard, but it recouped losses after the report was revised to make clear it was not the company’s founder.

Germany’s benchmark 10-year Bund yield rose to 1% for the first time since 2015, before retreating as caution set in ahead of the anticipated U.S. and UK rate hikes this week.

The yield on 10-year Treasury notes fell 1.5 basis points to 2.981%, after breaching the key milestone of 3% for the first time since December 2018 on Monday.

The dollar fell against a basket of major currencies as investors weighed how much of the Fed’s expected move to hike rates this week and beyond was already priced in.

The dollar, which has been supported by safe haven buying on worries over the economic outlook, stayed just below the nearly two-decade high reached in April and the euro steadied above the lowest level in more five than years hit last month.

Oil slipped as concerns about demand due to China’s prolonged COVID lockdowns outweighed support from a possible European oil embargo on Russia over the war in Ukraine.

Gold firmed, tracking a slight retreat in Treasury yields and the dollar, while investors eyed an aggressive rate hike by the Fed on Wednesday.