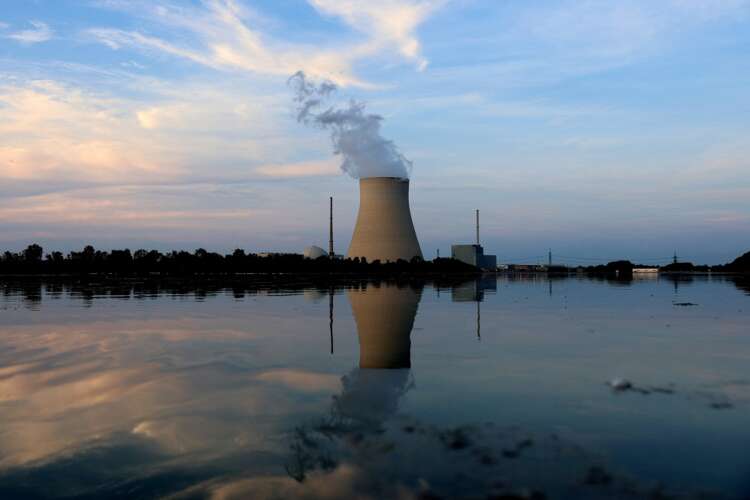 BERLIN (Reuters) -A power grid stress test has shown that extending the lifespan of two of Germany’s nuclear power plants could avert an energy shortage this winter, sources told Reuters on Friday, though the government said the results of the tests were not finalised.

Germany has three nuclear power plants still in operation but they are due to be shut down by the end of this year. Chancellor Olaf Scholz’s coalition has grappled with whether to keep them running to counter the effects of soaring gas prices and decades-high inflation following Russia’s invasion of Ukraine.

The stress test showed two plants in the south would help avert an energy crisis if, for example, coal power stations were not producing enough and there was high electricity demand in neighbouring France, the sources said.

A third nuclear plant in Emsland in Lower Saxony – operated by RWE and also slated for closure – was not required, the sources said.

Scholz’s predecessor, Angela Merkel, had initiated legislation to end nuclear power after the 2011 Fukushima disaster in Japan. Keeping the plants running would be unpopular with the Greens, Scholz’s coalition partner, whose opposition to atomic power is deep-rooted.

Asked about the stress test at a news conference, an economy ministry spokesperson said the results were not available yet and that the test was ongoing.

Government sources told Reuters that Scholz’s coalition was expected to discuss the issue on Saturday.

Separately, the chief of utility E.ON said he saw no technical obstacles to the safe continued operation of his group’s Isar 2 nuclear power plant – one of the two singled out by the stress test – beyond the end of the year.

“We could continue to operate the plant in a technically safe manner. It is continuously checked,” CEO Leonhard Birnbaum told Der Spiegel magazine.

Neckarwestheim 2, the other station that the stress test says could support security of supply, is operated by EnBW.

Grid operators have been stress testing the transmission system to assess the risks of an escalation in the Russian gas supply crisis to the network as winter approaches, and the usefulness of extending the lifespan of nuclear reactors.

Reduced gas deliveries from Russia via the Nord Stream 1 pipeline, alongside lower gas flows via Ukraine, another major route, have left Germany and other European states struggling to refill storage tanks for winter and prompted many to trigger emergency plans that could lead to energy rationing.

In the past Germany has been particularly reliant on supplies of Russian gas.