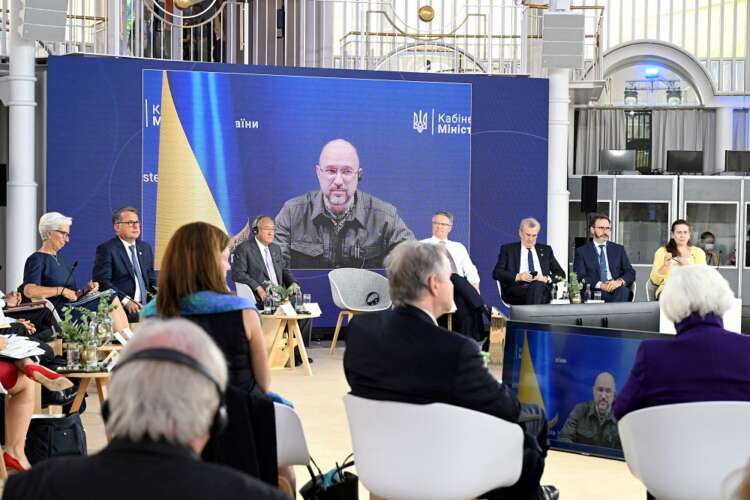 By Christian Kraemer and Francesco Canepa

KOENIGSWINTER, Germany (Reuters) – The Group of Seven’s financial leaders agreed on $9.5 billion in new aid to Ukraine on Friday and promised enough money to keep the country’s devastated economy afloat as long as it fights against Russia’s invasion.

Finance ministers and central bank governors of the United States, Japan, Canada, Britain, Germany, France and Italy – the G7 – said their support for Ukraine in 2022 so far would be $19.8 billion. The German finance ministry clarified the total included $10.3 billion already promised or disbursed earlier.

“We will continue to stand by Ukraine throughout this war and beyond and are prepared to do more as needed,” the G7 said in a communique at the end of the two-day meeting outside the German city of Bonn.

Ukraine estimates it needs some $5 billion a month to keep public employees’ salaries paid and the administration working despite the daily destruction wrought by Russia.

On top of the G7 aid, the European Union is to offer 9 billion euros ($9.50 billion) in loans to Ukraine and the European Bank for Reconstruction and Development and the International Financial Corporation are to offer another $3.4 billion in loans.

The G7 also called for supporting long-term reconstruction and recovery of Ukraine, calling it a “massive joint effort” that will need to be closely coordinated.

Economists’ estimates of the cost of rebuilding Ukraine vary widely between 500 billion euros and 2 trillion euros, depending on the assumptions on the length of the conflict and the scope of destruction.

German Finance Minister Christian Lindner told a news conference after the meeting the G7 discussed the possibility of confiscating Russian assets to finance the reconstruction of Ukraine, but there was conclusion yet. “It is an option that still needs to be thought through,” he said.

The war has been a game-changer for Western powers, forcing them to rethink decades-old relations with Russia not only in terms of security, but also in energy, food and global supply alliances from microchips to rare earths.

The G7 discussed proposals to reduce Russia’s revenues from energy exports, such as a phased embargo proposed by the European Union, forming a buyers’ cartel to cap prices for Russian crude, and imposing import tariffs on Russian oil.

The latter was floated by U.S. officials as a way of limiting Moscow’s oil profits while keeping Russian crude supplies on the market to avoid price spikes.

“Nothing is really crystallized as an obvious strategy,” U.S. Treasury Secretary Janet Yellen said about those talks.

Another G7 official said the pricing caps and tariffs were problematic because producers had little incentive to comply and consumers could end up bearing the brunt of the added costs.

G7 policymakers also discussed the global surge in inflation exacerbated by the war in Ukraine, which also brought about a sharp slowdown in economic growth, raising the spectre of stagflation – the dreaded 1970s combination of persistent price increases coupled with economic stagnation.

Lindner said inflation was an enormous risk and had to be brought down towards 2% quickly, while German central bank governor Joachim Nagel said negative interest rates were a thing of the past. The G7 comunique also said rates would go up, though in a way that would not destroy growth.

“G7 central banks… will…calibrate the pace of monetary policy tightening in a data-dependent and clearly communicated manner, ensuring that inflation expectations remain well anchored, while being mindful to safeguard the recovery” the G7 said.