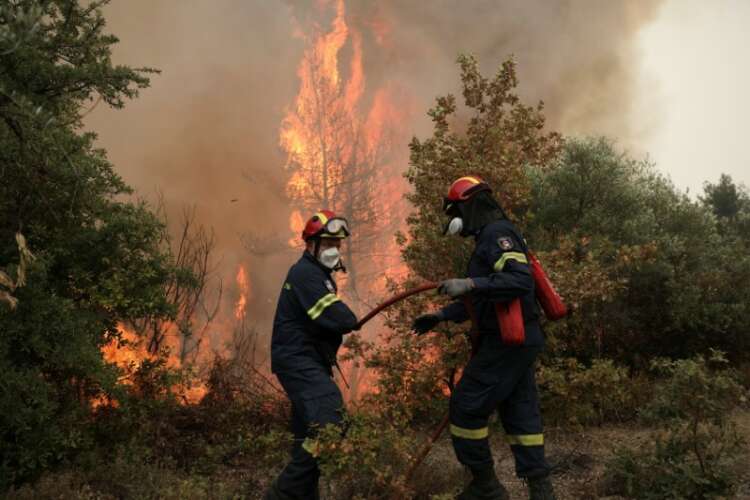 By Lefteris Papadimas and Leon Malherbe

AVGARIA, Greece (Reuters) – Residents mounted a round the clock watch on Tuesday to try to save their homes from wildfires still ravaging the Greek island of Evia, as the government defended its handling of the crisis.

Fire crews were bracing for winds to pick up later on Tuesday which could intensify flare ups on Greece’s second largest island, where fires were burning for an eighth day. Other fronts in the Peloponnese could also be reignited.

The government was due to announce relief measures for those who have lost homes and property, but for some villagers, leaving their houses to the flames turning the skies a deep red was not an option.

“Police came and told us to evacuate the village of Avgaria but we cannot, this is our property. We cannot let our homes burn,” said Ioannis Aggelopoulos, 55, who owns a car body shop at Istiaia, on the island’s northern tip.

“We have been sleeping in shifts.”

Residents were using hoses to put out fires burning near their homes and helping firefighters and volunteers.

In Athens, the main political opposition blamed the government for using climate change as an excuse to cover up deficiencies in its handling of the crisis.

“Climate change is without doubt an especially dangerous reality. However, it cannot be used as an excuse by the government because it ignored our warnings and those of scientists,” Alexis Tsipras, head of the left-wing SYRIZA party, told reporters.

On Monday, Prime Minister Kyriakos Mitsotakis apologised for failures in tackling the wildfires that have burned across the country as authorities began counting the cost in lost homes and livelihoods.

He is chairing a cabinet meeting on Tuesday and the government is due to announce relief measures for those who lost homes, farms and other property.

On Monday he approved a 500-million-euro budget for aid for Evia and the Attica region around Athens.

Deputy Civil Protection Minister Nikos Hardalias told reporters the state apparatus did everything possible as it was faced with 586 wildfires in eight days during the worst heatwave in 30 years.

“Do not shoot the fighters in the hour of battle. Every home lost for us is a stab in the heart,” Hardalias said. “The losses we suffered involved fighters, not civilians.”

One volunteer firefighter has died and three others have been hospitalised.

Sentinel-2 satellite imagery showed swathes of forest scorched by the wildfires in Attica, Evia and the Peloponnese, with the Athens National Observatory estimating that about 650,000 hectares had been burned in total until Sunday.

More than 500 fires have been burning across Greece, forcing the evacuation of dozens of villages and thousands of people. Almost 1,000 firefighters, nine aircraft and 200 vehicles have been sent to Greece from other European countries to help.

Mitsotakis promised that forests destroyed by the fires would be restored and climate defences would be built up.