It's culture versus commerce on Liverpool's Albert Dock these days 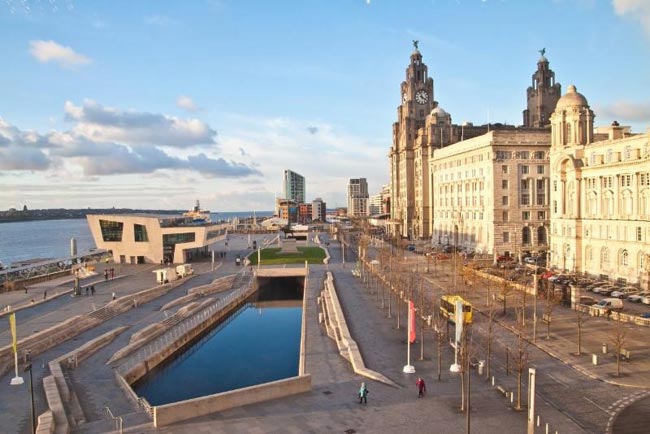 Liverpool’s first commercial wet dock, The Old Dock, opened in 1715. Three centuries later, the city’s docks are undergoing a huge reawakening of interest thanks to the appeal of Liverpool’s waterfront not to traders but to investors.

Life on the docks in Liverpool these days offers an escape from the stresses and strains of city life. Waterside living is highly prized for the serenity that it brings, but it certainly hasn’t always been that way. When Albert Dock officially opened in 1846, the area was a bustling hub of goods, travellers and horses. The sounds and smells were intense, with goods arriving from around the world and others being shipped out, while travellers and migrants flitted around preparing for their journeys and new lives overseas.

Today, Albert Dock seems a calm oasis by comparison. It’s still a busy area, following the regeneration work that began in 1983, but these days the emphasis is on culture, the arts and on trend housing, as much as it is on shipping. The creation of the vast Liverpool2 deep-water shipping dock has kept the city’s docks true to their roots, but the presence of iconic attractions like the Tate Liverpool and the Beatles Story has brought a new sophistication to the area that is helping to draw they city’s bright young things to the area in search of homes.

“Liverpool’s docksides have seen a huge transformation in recent years. There’s always something going on there at the moment – I believe it’s a huge folk festival this week – which is making the area popular with city dwellers who want to be at the heart of the action. At the same time, the waterside manages to maintain a serenity that balances out the busy social life available. It’s a winning combination for many young professionals, which means that it’s also an important area for residential property investors.”

The importance of waterside locations is highlighted by auction house Sotheby’s, which points out that demand for such homes tends to outstrip supply, meaning that waterfront homes make an excellent investment, as they retain and increase their value over time. Rental demand is strong thanks to tenants seeking out the calming views and lifestyle benefits of such locations.

For many investors with an eye for future development, Liverpool Dock represents a particularly interesting prospect right now. Global investment company Aberdeen Asset Management has purchased the dock, including over 400,000 square feet of hotels, retail outlets, offices and leisure venues, from previous owners Arrowcroft, who owned it for 33 years. The sale price was agreed at £42.75 million and property investors are eager to see how the new owners – and their managing agent JLL – plan to improve the area further over the coming years.

The Albert Dock already has a reputation for innovation. It was the first structure in Britain made entirely from cast iron, brick and stone, to reduce the fire risk associated with wooden warehouses. It also featured the world’s earliest hydraulic warehouse hoists, making it the first non-combustible, enclosed dock warehouse system in the world.

Today, the Liverpool2 superport is continuing the maritime innovation, while the city council also looks to be moving forward with the next stage of planning for a new cruise terminal. On dry land, concept art showing the area in 2021 has focused on expanded pedestrian areas, pop up shop and exhibition venues and colourful seating areas. Meanwhile, property developers have taken up the challenge, developing some of the most attractive apartments in the city, offering waterside living to the new, trendy breed of Liverpool residents looking to get the most out of every moment of life in the city centre.

“Liverpool’s docksides have an exciting future to look forward to,” concludes Prime Centrum’s Stuart Johnson. “Their renaissance as one of the most exciting areas in the city to live is only just beginning – there’s a lot more to come!”

Investors wanting a piece of that future can invest in Parliament Residence from £109,900, enjoying a 22% early investor discount.