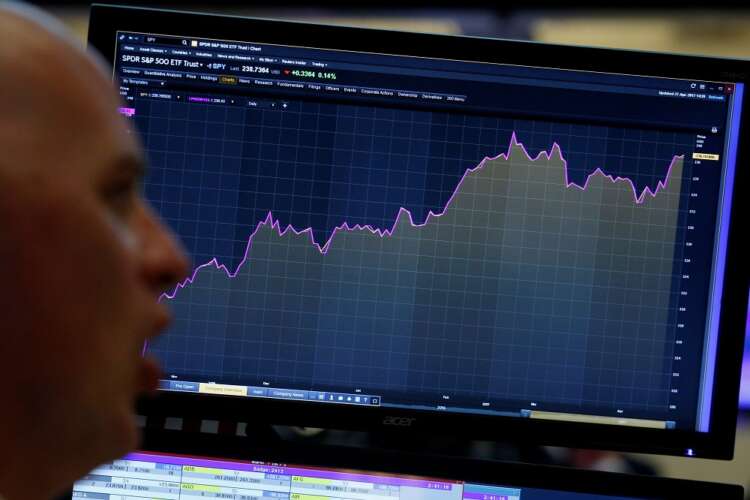 (Reuters) – Trend-following hedge funds are capitalising on market disruption and geopolitical unrest, with funds such as Graham Capital Management, Aspect Capital, AlphaSimplex and AQR Capital Management all near or over 40% higher for the year.

Such funds profit by buying or selling when the markets make big moves and by riding that move until it fizzles out or the market changes direction.

They have thrived in markets whipped around by soaring inflation, high interest rates and the energy shock.

Stock market volatility as measured by the CBOE Volatility Index – known as Wall Street’s fear gauge – has risen sharply since August and an ICE BofA index tracking U.S. Treasury volatility is at its highest since March 2020.

Trend strategies work best when volatility levels are high, says Yao Hua Ooi, principal and co-head of macro strategies at the $143 billion hedge fund AQR, which has one trend fund set for its best year so far, up 70%, according to a source with knowledge of the matter.

“This is the type of environment where trend-following strategies historically have tended to thrive and provide valuable diversification benefits,” said Ooi, referring to how large investors sometimes use hedge funds in a portfolio as an alternative source of revenue to traditional investments.

AQR is part of an index of the 10 largest trend-following hedge funds, compiled by Société Générale. The index has risen almost 37% this year, compared with a 3.8% increase in data provider HFR’s broader index of hedge fund performance. BarclayHedge estimates that trend followers are $297 billion of the $4.9 trillion hedge fund industry.

Other funds in the index also posted double-digit returns.

Graham Capital Management’s least leveraged share class in its Tactical Trend Fund was up 40% this year as of Oct. 11, Aspect Capital’s Diversified fund is up 43.7% as of the end of September, and Winton’s trend-following strategy was up 24.5% so far this year, said people with knowledge of the matter.

Hedge funds Man Group, AlphaSimplex and Transtrend have reported trend strategies with performances this year of roughly 15%, 48% and 31% respectively. 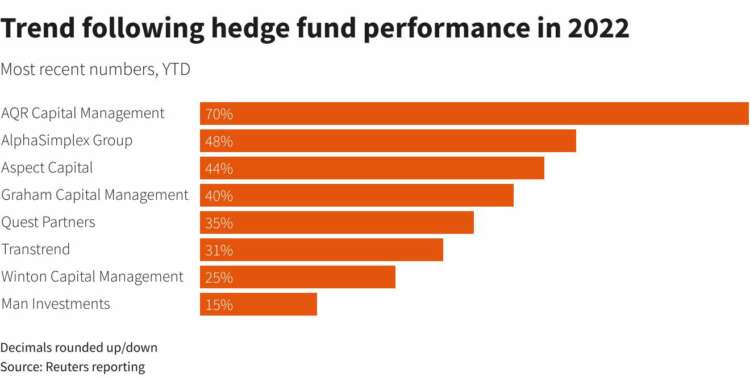 “We do best when things change and particularly in ways that people don’t like,” said Kathryn Kaminski, chief research strategist at AlphaSimplex Group which manages 7.8 billion pounds ($8.8 billion) of assets.

“In those environments it works well to follow the markets as opposed to asking what markets should or should not be doing.”

“We have seen all of these disruptors emerge,” said Razvan Remsing, director of investment solutions at Aspect Capital.

Juxtaposing the war in Ukraine, the energy shortage in Europe and even the change in people’s behaviour post-pandemic with the growing reality that central banks can no longer be relied on to mitigate volatility and clearly there is a “highly uncertain and divergent macro environment,” he says.

“To us this actually means more opportunity,” Remsing added.

Simultaneous declines in stock and bond portfolios, a surge in volatility and unexpected market pricing have made a perfect storm for trend followers, says Robert Khoury, an independent hedge fund analyst.

“They’ve been hitting it on all cylinders,” said Khoury.

The ultimate aid for trend followers has been inflation, said Michael Harris, president of the $2.6 billion Quest Partners, which is up 34.7% for the year, according to a person with knowledge of the matter.

Cheap money in the system and geopolitical risk has meant supply issues and therefore inflation. The world faces a new regime of monetary tightening and volatility, he said.