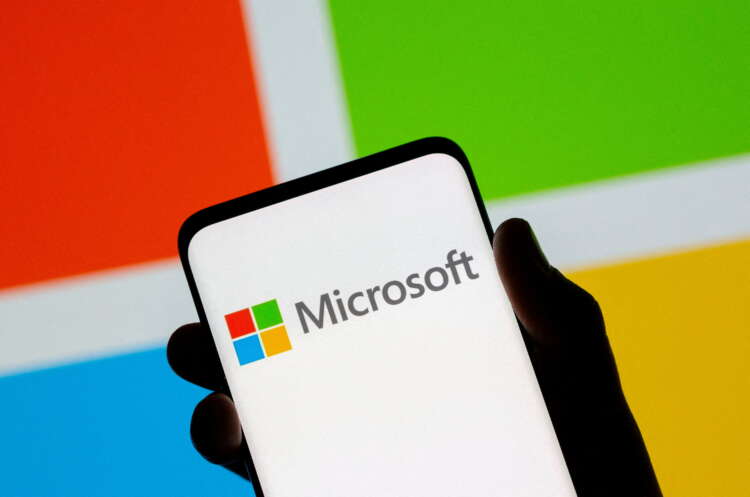 (Reuters) -Microsoft Corp on Tuesday forecast revenue for the current quarter broadly ahead of Wall Street targets, driven in part by its Intelligent Cloud unit.

The outlook soothed concerns about growth sparked by results for the December quarter, which initially dragged on Microsoft’s shares in after-hours trade. But the shares reversed course following the outlook, trading 3% above the closing price.

Investors were seeking assurances that the enterprise cloud business is still growing strongly and got it from Microsoft.

“So the quarter itself was, ho hum. Good, but not as great as we’ve seen past quarters,” said Brent Thill, an analyst at Jefferies. “But then the guidance for the third quarter really turned the tape around and saved the Nasdaq, if you will.”

Thill said Microsoft’s guidance that Azure revenue would be up sequentially was strong assurance that cloud demand was solid.

Microsoft forecast Intelligent Cloud revenue of $18.75 billion-$19 billion for its fiscal third quarter, driven by “strong growth” in its Azure platform. That compared with a Wall Street consensus of $18.15 billion, according to Refinitiv data.

Microsoft delivered strong outlooks in other areas, too.

The More Computing unit expects revenue of $14.15 billion-$14.45 billion for the third quarter, ahead of the Wall Street target of $13.88 billion, and Productivity and Business Processes of $15.6 billion-$15.85 billion compared with the consensus target of $15.72 billion.

Full-year operating margins are forecast to be up slightly from the previous year.

Microsoft’s total second-quarter revenue beat expectations but Azure revenue growth of 46% was only in line with analyst expectations as compiled by Visible Alpha. The Azure growth showed a steady drop from fiscal 2020 when growth was in the 60% range.

Microsoft has become one of the most valuable companies in the world https://www.reuters.com/technology/apple-set-hand-crown-worlds-most-valuable-company-microsoft-2021-10-29 by betting heavily on corporate software and services, especially its cloud services and the movement to the web of its Outlook email and calendar software, known as Office 365, which benefited from the switch to working and learning from home during the pandemic. Demand for cloud services from Microsoft and rivals Amazon.com and Alphabet also benefited from the pandemic-fueled shift online.

Revenue from Microsoft’s biggest segment, which offers cloud services and includes Azure, its flagship cloud offering, rose 26%, while the business that houses its Office 365 services increased 19% in the quarter.

The company said revenue rose to $51.73 billion in the three months ended Dec. 31, from $43.08 billion a year earlier. Analysts on average had expected revenue of $50.88 billion, according to Refinitiv data.

Investors are also focused on Microsoft’s proposed $69 billion acquisition of Activision Blizzard Inc https://www.reuters.com/technology/microsoft-buy-activision-blizzard-deal-687-billion-2022-01-18, announced on Jan. 18, a huge expansion for its gaming division. It also broadens the company’s efforts in the so-called metaverse, or the merging of online and offline worlds, which will have corporate and consumer applications.

“They have a ton of great content and franchises. And that’s where that revenue would eventually come in when the deal lands, for sure,” said Brett Iversen, general manager, investor relations at Microsoft, referring to the Activision deal.