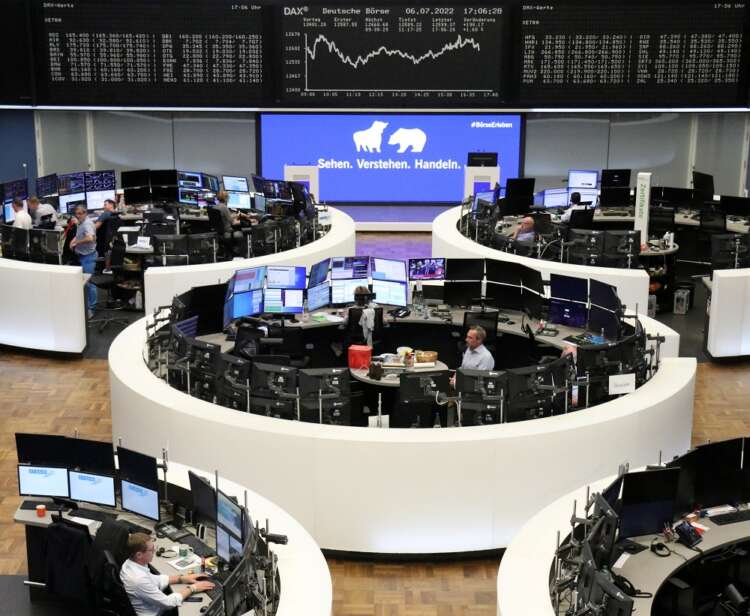 (Reuters) -Automakers and retail stocks on Friday led a rebound in European shares from a two-day rout that saw investors grapple with shifting expectations of U.S. interest rate hikes, a political crisis in Italy and recession risks.

Italian shares rose 1.4%, bouncing off 2-1/2 year lows hit in the previous session as investors awaited further developments in a political crisis brewing in the country.

Italian Prime Minister Mario Draghi offered to resign after one of the parties in his fractious coalition failed to back him in a confidence vote over his plan to combat soaring prices.

“Tensions and uncertainties on the political front entail downside risks on the growth and financial front,” said Domenico Ghilotti, an analyst at Equiti.

“Stocks with greater international diversification and a solid financial structure, with inflation protection are to be preferred, while financial and cyclical stocks are the most exposed to the downside.”

The STOXX 600 index was up 0.8%. It slid 2.6% in the last two sessions on worries the U.S. Federal Reserve may hike interest rates by a bigger-than-expected 100 basis points later this month.

But worries eased a bit after two of the Fed’s most hawkish policymakers said overnight they favoured another 75-basis-point (bps) hike.

Aggressive steps by major central banks to battle surging inflation have left investors worried about a possible global recession. Grim economic growth out of China on Friday due to a hit from COVID-19 lockdowns also added to worries.

The STOXX 600 is set to log its worst week in a month, down about 1.7%, against the backdrop of fears of an energy supply crunch due to the Russia-Ukraine war.

Investors next week will look to the European Central Bank’s policy meeting. Analysts have started to price in a small chance of a 50-bps hike as opposed to the 25 bps the ECB has signalled.

Gains on the day were led by automakers, up 3.3%. Retail and tech stocks followed.

Richemont and Burberry lost 4.9% and 6.4%, respectively, while peers including LVMH, Hermes and Kering lost between 0.7% and 1.7%.

Second-quarter earnings for STOXX 600 companies are expected to increase 21.7% from a year ago, according to Refinitiv data, with a chunk of the boost coming from the energy sector.

(Reporting by Susan Mathew in Bengaluru; Editing by Rashmi Aich and Arun Koyyur)