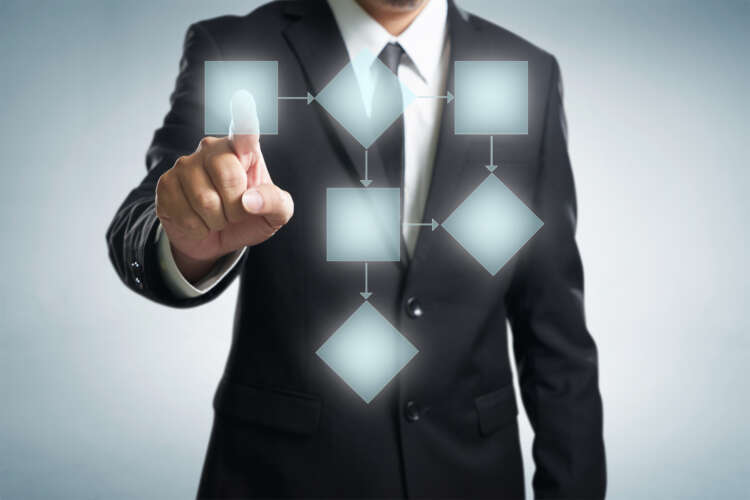 The scale of change in the financial services industry is immense both in terms of the services offered and the technology underpinning them. Traditional institutions face increasing pressure as new challenger banks and tech start-ups disrupt the long-held industry status quo. The sector has responded by accelerating innovation in-house or via acquisition – which has only been spurred on by the Covid-19 pandemic. As well as pressure from within, consumers increasingly expect digital experiences, forcing the sector to respond to stay competitive.

Automation is playing a key role in that digital transformation. Market leaders often stand out for their efficiency, nimbleness, and ability to adapt to offer new products – all hallmarks of automation excellence. Both the customer front-end and the technical back-end of organisations can reap the benefits.

Previously, robotic process automation (RPA) was the focus of organisations’ automation efforts. While RPA can improve productivity, its effectiveness is limited without integration into larger organisation-wide processes. Today, institutions are unifying their automation efforts, bringing people, bots, systems and data together in orchestrated workflows.

But let’s be clear, this level of automation is not happening consistently across the industry. A new study, produced by Appian in collaboration with Longitude, a Financial Times company, throws light on the scale of experience and opportunities afforded by automation, as well as learnings from market leaders for those further earlier on in their automation journey. What successful practices do leaders in automation adopt? And what can everyone else learn from those pioneers?

What is automation maturity?

The study involved 500 global C-level executives, looking at their implementation and experiences using automation technology as part of digital transformation initiatives. The initial results have helped define 10 distinct dimensions of automation excellence, revealing a gap between those achieving the most success from their automation – faster customer onboarding, for instance – and those furthest away from reaping any benefits.

According to the research, financial institutions – banks, asset managers and investment firms – can be categorised into ‘Leaders’ (using sophisticated automation), ‘Laggards’ (who are failing to gain value from automation), and the ‘Mainstream’ (everyone else). Almost all Leaders derive cost savings and competitive advantage from their automation investments.

Here’s an example of the breadth of difference. Imagine two banks, each looking to maintain their datasets and update missing information to comply with regulation. One creates an app that continually scans for missing information, automatically requests it from customers, deciphers customer responses and flags any unusual entries for the customer services team to investigate further. The other bank asks the customer services team to manually identify missing data, chase up customers, and enter the data by hand, risking errors in the process.

The gap between these approaches is stark, yet they come from real process examples. Automation makes a marked difference to a business by introducing speed, accuracy and efficiency. And it’s an advantage that scales when applied across different categories and business units. It reduces the workload of valued customer-facing staff, while resulting in better quality outputs that help meet the increasing demands of compliance.

In the data, Leaders stand head and shoulders above everyone else. For example, almost all (96%) of Leaders report having an enterprise-wide automation strategy, while the majority of Laggards (81%) struggle to prioritise automation projects. The majority of Leaders (70%) have scaled up their use of robotic process automation (RPA), yet many of the Mainstream respondents (44%) are stuck in the pilot phase of implementation. That could be explained by their size and strength of investment, but it’s not the whole picture.

Crucially, almost all (98%) Leaders say they get significant cost savings from their automation, compared to just 7% of Laggards, showing that automation is still a driving force on banking’s bottom line.

The world’s largest financial services are, understandably, leading the shift towards automation, and the gains they make can help inform the whole industry. But size isn’t the whole story. We’re seeing a huge gap between Leaders and Laggards, as well as a significant majority who fall into the Mainstream across industry sub-categories.

One enterprise, one strategy

The finance sector is embracing automation – to introduce speed, accuracy and efficiency, freeing the workforce up to take on more valuable, complex work. But it’s clear that there’s a chasm between what automation success (or maturity) looks like from organisation to organisation.

Today, automation-mature organisations face few limits to the scope and scale of the opportunities available to them. These span every business function and department, encompassing everything from simple data entry tasks to end-to-end management of highly complex procedures.

But they need to be careful. When different functions and departments become aware of the opportunities, there is the risk that many separate automation efforts bloom like wildflowers across the organisation — without any centralised coordination. This can lead to wasted resources and a proliferation of systems and platforms, preventing truly end-to-end process automation that spans multiple departments.

Looking at the Mainstream group in the research, we see that 67% of people are achieving some degree of cost savings from automation, while only 49% are able to use automation to add a competitive advantage. Double the percentage of Leaders reported a competitive advantage gain at 98%. It’s clear that, for some, automation enables growth in one area but not necessarily in others. That lack of joined up approach – an enterprise-wide automation strategy or centre of excellence – contributes to much of what we’re seeing in the research.

The Leaders in our survey overwhelmingly favour an enterprise-wide automation strategy and have an established centre of excellence to create efficiencies, ensure consistency, and coordinate automation efforts globally. The Laggards have neither in place, and, perhaps as a result, struggle to assess the priorities of their automation projects.

While the research shows there’s no single route to automation excellence, it also shows that the most unified, complete views of automation across the institution bring about the greatest benefits. Leaders demonstrate an ability to seamlessly integrate people, AI, RPA, workflows, databases, and systems. Orchestration across a unified workflow lies behind most of the benefits – for the customer experience, for employee satisfaction, and for the future of the enterprise – as well as supporting risk, compliance and change management, and business strategy.

For financial services, the race is clearly on between heritage players and the new generation of start-ups. The more “complete” an organisation, new or established, is in its automation efforts will directly impact the degree of success it can have in leveraging competitive advantage and cost savings, improved customer and employee experiences, and increased agility.

Have you got the skills?