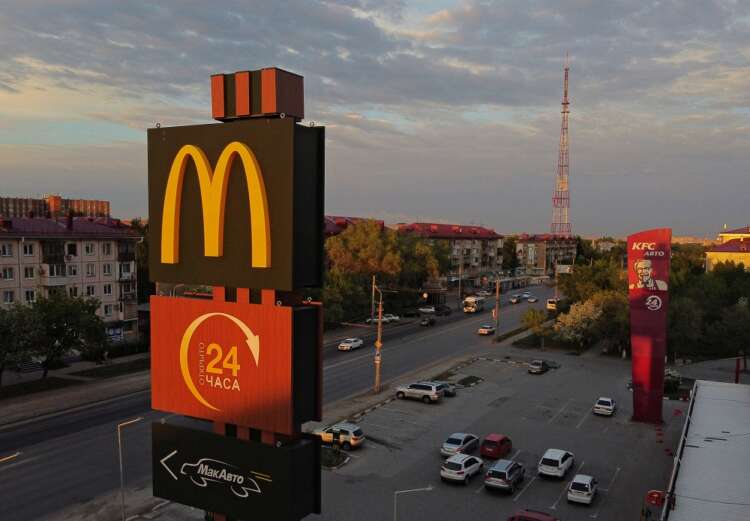 (Reuters) -McDonald’s Corp is selling its restaurants in Russia to one of its current local licensees, who will rebrand them under a new name, ending more than three decades of the “Golden Arches” in the country, the fast-food company said on Thursday.

The world’s largest burger chain owns 84% of its nearly 850 restaurants in Russia. Chicago-based McDonald’s on Monday became one of the biggest global brands to exit Russia following its February invasion of Ukraine. McDonald’s said it will retain its trademarks.

In March, McDonald’s temporarily closed its restaurants in Russia including its first location in Pushkin Square – a symbol of American capitalism flourishing in the dying embers of the Soviet Union. McDonald’s came to embody a thawing of Cold War tensions and was a way for millions of people to sample Western food and culture.

The McDonald’s restaurants in Russia will be sold to Alexander Govor, who runs the franchise operation through his firm GiD LLC. Govor has been a McDonald’s licensee since 2015 and had helped the chain expand into remote Siberia, where he operates 25 restaurants.

McDonald’s and GiD declined to disclose financial terms of the deal. McDonald’s had said it would take a non-cash charge of up to $1.4 billion following a sale.

Govor will retain employees for at least two years on equivalent terms, McDonald’s said, and will pay employee salaries in 45 regions of Russia until the closure of the sale, which is expected in the coming weeks.

Russia’s Industry and Trade Minister Denis Manturov said the deal followed a “long and difficult” negotiation process and the government would provide Govor all the necessary assistance to set up operations.

Interfax news agency’s Spark database of Russian companies listed Govor as a co-owner of Siberian Distribution Centre, a rental company, and the Anzherskiy Oil Refinery. Govor also holds a 50% stake in a small forestry company and 25% in a fishing and hunting company, the database showed.

SPP did not immediately respond to a Reuters request for comment.

Several other Western brands, including Imperial Brands and Shell, have also agreed to sell their Russian assets or hand them over to local managers.

It was not clear what impact the McDonald’s deal would have on its other major franchisee there, Rosinter Restaurants, and whether Rosinter would also need to rename the McDonald’s restaurants it operates. Rosinter declined to comment.

Russia’s industry and trade ministry invited Russians to send in their suggestions for a new name.

“Write your versions in the comments!” the ministry wrote on its Telegram channel. “We will pass on the most creative and interesting ones to the Russian owner.”

“MakDak” was a popular early suggestion among Telegram users.

American lawyers are pessimistic about the prospects for companies like McDonald’s being able to enforce their Russian trademarks, noting recent Russian actions they say undermine Western intellectual property rights.

A March government order has been widely interpreted to give Russians a royalty-free license to patents owned by entities from “unfriendly” places like the United States, United Kingdom, and European Union.

A Russian court also rejected a trademark case later that month brought by the British-based owner of the children’s character “Peppa Pig,” citing the country’s actions against Russia.

The odds of McDonald’s retaining its trademarks in Russia after leaving are “slim to none,” said Josh Gerben, a trademark attorney with the Gerben Law Firm in Washington.

“Russia does not have a balanced rule of law where both parties can be equally protected,” international franchise consultant William Edwards said. “It’s always been that the government, courts, companies and mafia are against you, but otherwise you’ve got a good chance.”

Vladimir Biriulin, a Moscow-based partner at the law firm Gorodissky & Partners, called reports that the Russian government may seize trademarks “outright false” and said McDonald’s would have “no difficulties to enforce its rights if such becomes necessary.”

(Reporting by Praveen Paramasivam in Bengaluru; Additional reporting by Hilary Russ in New York and Blake Brittain in Washington; Editing by Arun Koyyur and Will Dunham)

Spiralling costs could take Greek graviera cheese off the menu