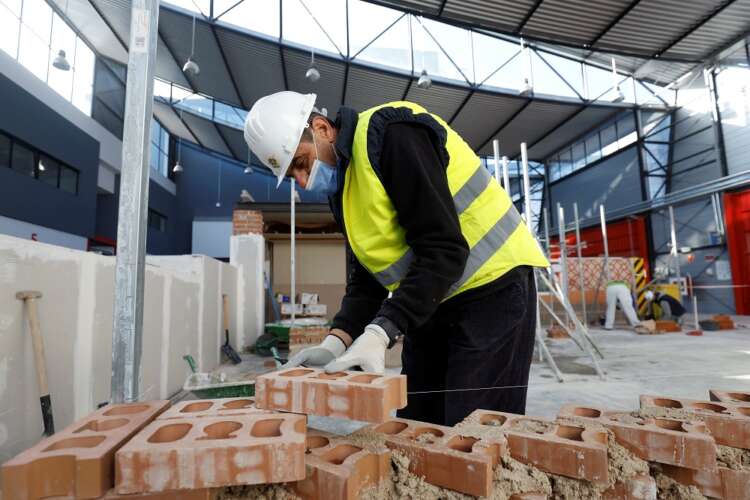 By Corina Pons and Belén Carreño

Now those construction workers are urgently needed back: an unprecedented labour shortage is jeopardising multi-billion euro building and renovation projects funded by the European Union to help Spain’s economy recover from COVID-19.

As elsewhere around the continent, Spain is short of at least half a million building workers, according to unions and companies. Firms are training new staff round the clock, paying better, and leaning on migrants from Africa and Latin America.

“If you have a certificate, companies will hire you,” enthused Moustapha Diedhiou during a break in an evening class for scaffolding in Madrid.

The 32-year-old Senegalese arrived on a rickety boat in 2019, picked fruit for a living during the pandemic, but now works as a bricklayer thanks to another previous course.

Though scaffolding is riskier, he can earn more.

Despite such keenness, at least seven out of 10 construction companies had to turn down contracts in 2021 due to lack of staff, according to preliminary data seen by Reuters of a survey from Spain’s main building association.

And that before the first 5 billion euros ($5.65 billion) in housing rehabilitation funds go to tender this spring.

After Italy, Spain is receiving the most EU aid: around 140 billion euros ($166 billion), half grants and half loans.

The government is pinning hopes of 7% economic growth this year on the funds, but red tape, material shortages and labour gaps are hampering investment.

Spain had almost 3 million real estate workers before the 2008 implosion, after which many took refuge in the equally massive tourism sector. Now they seem reluctant to come back.

So employers, unions and the government have clubbed together to run free training courses for would-be builders. They drew 90,000 people in 2021, and the target now is 200,000.

At one Madrid course earlier this month, most signing up were migrants from non-EU countries, optimistic that along with Spain, they too would see a turnaround in their fortunes.

Most other manual workers are on about 18,500 euros.

Jose Adel Sosua, who teaches the Senegalese immigrant Diedhiou, is dismayed at how hard it is to attract students, blaming bad memories of the housing crash.

“Many Spaniards don’t want to do these courses, in part as they are a bit afraid of going back to work in this sector,” said Sousa, whose 15 students only included one Spaniard.

Spain is second only to Greece for unemployment in Europe, with nearly one in three young people out of work. A survey of those aged 15-29 in work last year found that 11% were working on building sites.

“Here in Spain they say that if you don’t study you have to be a bricklayer, as if it were a punishment,” said Sergio Estela, a leader at Spain’s General Workers Union (UGT-FICA).

Crane operators, carpenters, welders and site managers are most scarce, according to a dozen sources from unions and companies, because they require officially accredited training.

Ismael Lazaro, a 24-year-old Spaniard, took a welding course after losing his job as an Amazon delivery driver. He is the only one among his friends trying to enter construction. “My mother told me there was a lot of demand for welders,” he said.

The predicament is echoed around Europe.

Combined with supply chain disruptions, that has pressured wages and prices in the sector, contributing to record euro zone inflation.

“It’s a complicated balance between finding qualified workers, having to pay more and dealing with investors fighting hard on prices,” said Miguel Fernandez, 42, director general in Spain for construction and design firm Tetris.

Germany’s industry lobby association ZDB said more employees were retiring than apprentices joining the construction workforce, with about 150,000 workers expected to go in the next decade.

Germany is relying on migrants too. Building sites are dominated by central and southern Europeans, who accounted for 22% of the workforce in 2021, up from 8% in 2008.

Like Spain, Ireland haemorrhaged workers at the end of its own “Celtic Tiger” housing boom in 2007.

Now, the Irish Fiscal Advisory Council (IFAC) estimates the number of builders must increase by around a third to 180,000 to meet demand amid record foreign investment. Tech giants Facebook and LinkedIn are constructing massive campuses in Dublin.

Back in Madrid, dozens of undocumented migrants gather early each day in the Plaza Eliptica square, hoping to be picked by drive-by employers seeking temporary painters or bricklayers.

Some 400,000 foreign workers left after Spain’s 2008 financial crisis, many using EU residency to find work elsewhere in the region. Down to just 13% of construction workers in 2012, they are back to one in five now.

“The square is the salvation for migrants who need work,” said Alberto, a 54-year-old welder who arrived six months ago from Colombia.

Spain’s jobless should be prioritised, but “if we don’t find workers, we will have to go abroad to bring them in,” he said.

“Otherwise, many of the projects we want to start up will be unmanned and we will stop receiving European funds.”